What is the difference between the TopGun method and conventional Paintless Dent Repair? 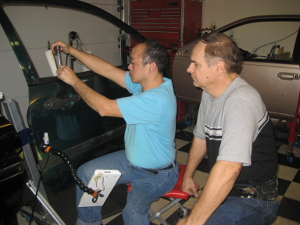 With conventional PDR repair, the main concern is bringing up the dent or crease flat with the panel. This is generally done as fast as possible with fairly inaccurate pushes. Since the main goal is to bring the dent up quickly, being really accurate is usually seen as a waste of time. With conventional Paintless Dent Repair it can often be difficult to see your tool tip, especially in a deep dent or crease, until you make a small tool mark. These tool marks are tapped down once the bulk of the dent is up and the dent is brought up as level as possible to a close finish. The dent is then crossed checked and worked to make it look good from more than one direction of sight. Crown work is generally done later if it is deemed necessary to relieve any pressure that may still be holding the dent in. The reflection source is then moved back farther from the techs eyes and closer to the panel to see any slight low area as compared to the rest of the panel. The tech puts his eyes closer to the panel and the dent is worked to the finished level.

So what is the difference?

The TopGun process is actually a marriage between state-of-the-art Paintless Dent Repair techniques, the PIRP process (pressure identification and release process), and old-school metal working methods. With this process, pressure release is what really matters and the dent comes up almost as a by-product. The dent is not wrestled with but released the way it wants to be. Crown work is often done first instead of last, in a special manner quite different from conventional crown work done in most PDR. Specific pressure holding areas inside and outside the dent are identified and quickly released. All unnecessary pushes are eliminated. Every dent will show you how to release it once you know what to look for. This method shows you how to identify, precisely push, and release pressure from the correct areas of a dent, every time. This process may seem too scientific or "too complex for just dents," but it is actually easy to learn. The deeper and more complex the dent, the more useful this method becomes.

This method also eliminates many things that steal valuable time from a PDR tech. You seldom need to use a tap down to correct bad pushes, because you never have to make a tool mark in a dent to tell you where your tip is, even in most deep dents. The tech will also know exactly when to stop a push so he almost never makes a bad push and gets the most efficiency from each push stroke. Working a dent up and down is also virtually eliminated because you bring up the dent in a smooth flow, instead of an up-and-down fight. After cross-checking you will find that your dent looks great, because you didn't make any cornrows, pressure holding areas, or hidden push marks. Finishing the dent is done with a different reflection board position than conventional PDR. Precise pushes and pushing patterns are then used to quickly bring the dent to a quality finish with no time wasted using many pushes to get the dent flat with the panel. This method also performance-tunes your Paintless Dent Repair technique, helping you to always work at maximum efficiency.

Unlike conventional PDR this process also teaches you to teach yourself. When you come across a dent that is new or complex, you will know how to break it down into a manageable repair sequence. Note: See Advanced PDR training curriculum for more information.

NEXT: Should I learn PDR

What students have to say about our PDR Training courses.